Find some way to hang a picture (with the arbitrarily long, infinitely light and thin string already on) on two nails, spaced apart horizontally to the ground, so that when either nail is removed, the picture will fall.

This problem is really interesting in that it can be extended to much more general cases. Solve the Picture Hanging problem for:

What is the minimum number “wraps” needed to accomplish each of the above statements, where a wrap is some amount of a turn around a nail?

Without using mathematics that are too complex, we can equate this problem to one of grouping matrices and inverse matrices. Let’s let $p_k$ represent a clockwise “wrap” around nail $p$, and $p’_k$ represent a counterclockwise wrap around nail $k$, in other words, the inverse of $p_k$. Then we can notice several things. 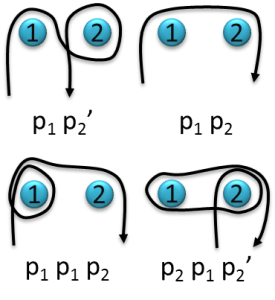 With this mindset, solving the picture hanging problems is a lot easier; we can do this using a sort of educated guess and check.