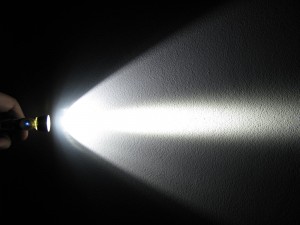 The AGMF series flashlights are like the AGXF and AGUF series in basic structure, and like the AGXF in the use of a microcontroller, but differ in that the AGMF aims to be both smaller and metallic (the “M” stands for miniature, or micro, or metal, or microcontroller, or…).  The AGMF Flashlight is probably one of my most professional I’ve ever built, for several reasons. The most obvious is that it has a polished aluminum case and lens. But besides that, there are some more subtle ways it has a higher level of professionalism. One way is that it allows for replacing the Li-Ion cell, like a normal flashlight. Additionally, it has a microcontroller which allows for both remote control and advanced LED controls.

Like I did with the previous AG:XF01 Flashlight, in making the AG:MF01 flashlight, my design phase started with drawings and sketches of the shape and functions of the planned flashlight. I actually created an initial design on Google SketchUp, although this would turn out to be quite different from my final design.

I also created a list of functions I planned to employ:

From the list of functions I intended to employ, you can see that this was supposed to be a fairly advanced flashlight. In a way, it would be more advanced than my AGXF flashlight, but also, it would be simpler. As I mentioned, the flashlight would have am IR receiver for remote control purposes. (This IR Receiver would follow the same protocol described in my AGXF Flashlight Project). Also like the AGXF Project, it would include a thermister for LED temperature management.

However, one of the more advanced features on this flashlight was the exponential light output function. So what I noticed with the AGXF flashlight was that varying the potentiometer key linearly produced a light output that did not seem to vary linearly. I realized the eye interprets light on a roughly logarithmic scale ($I_{\text{eye}} = \log{k I_{\text{real}}}$, where $k$ is a constant associated with the potentiometer). To make the eye see a linear change in light intensity for a linear change in input voltage, I had to modify the program to change the LED’s brightness exponentially from $0.01\%$ to $100\%$, ($I_{\text{eye}} = \log{(I_{\text{real}})^k} = k \log{I_{\text{real}}}$). This turned out to be fairly difficult and involved a lot of math to approximate (since there was no MCU instruction “exp”).

And here’s the final code I ran on the MCU: OS.asm