My AGUF series flashlights were a long series of flashlights that were mainly characterized by the use of a bright high power LED, a DPDT latching push button switch, and a generally tubular form. My earliest flashlights in this series were very simple – an N-size 12v battery, a DPDT latching switch, a high power Cree LED, a 30o lens, and a large straw (1/2″ I.D.) for the case. I later found that switching to AAA-sized Li-Ions (10440) gave much higher power outputs. Here are some of the more advanced AGUF series flashlights. 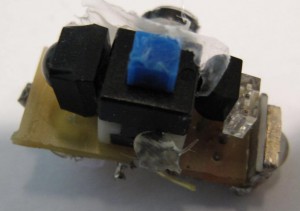 So I was buying some neat items from an electronics store that included a “grab bag” of random electronic components.  One of the components was an IR receiver.  Upon seeing how the receiver worked, I became interested in building flashlights that could be controlled by infrared.  My first circuits simply attached the IR receiver output to a transistor to the power LED.  You saw this earlier with the AG:SF02 Flashlight. 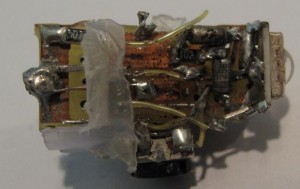 I think this device was one of the first of a line of flashlights in the AGUF series.  This series was mostly characterized by the shape of the case (tubular – like an actual flashlight).  The picture on the left demonstrates my continuing use of etching custom circuit boards.  Note also, this was one of my first projects to incorporate SMD components.  An important step towards the future of minimization!

This was a more recent project.  While it didn’t include the use of a custom-made circuit board, it did use a large number of SMD components.  Its design would also eventually lead to the design of the AGXF Flashlight.  This is especially true in that it combines an IR, RGB flashing, and UV LED with a bright White Cree LED.  Another important design aspect was the use of a clear hard plastic case.  All of these would eventually be the basis for my AGXF Flashlight.

This was one of the last flashlights in the series, and was a good transition into my more advanced AGXF flashlight.  I think this flashlight was probably the first to include an actual label and part number (AG:UF15-2007/WT).

Unfortunately, I don’t have good documentation on this flashlight, but I did spend a fair amount of time planning its construction.  You can also see in the image that this flashlight incorporates both a lighted DPDT switch (new innovation) as well as an IR receiver near the back end of the flashlight.

In fact, this flashlight included a host of nice features.  For example, the side view shows a heat sensitive material (taken from those old AA batteries) that indicates when the LED is too hot.  Just below that sensor is a “key.”  The idea for this was that instead of building in a potentiometer to control the LED’s brightness, I could just build a custom key.  Finally, magnets on the bottom and back allowed for attaching to magnetic surfaces, such as my glasses (when I want to use the flashlight hands-free).  You can also see in the image that this flashlight incorporates both a lighted DPDT switch (new innovation– built from scratch, by custom incorporating an SMD LED in a miniature push button switch) as well as an IR receiver near the back end of the flashlight.

Despite its small size, it was very bright, as you can see in the image to the right.