At my high school, TJHSST, all freshmen take “IBET” – integrated Biology, English, and Technology. One of the last projects we did for the “technology” portion was a robotics competition. In this competition, all of us were given two servos, a PICAXE board, and a few additional components, then we had to design a case for the robot, as well as put together the PICAXE board, the servos, the wheels, etc, to make a functioning robot. Finally, we had to program the PICAXE chip to control the robot. The challenge/goal was to get around a maze of obstacles.

Actually, even before working on the robots, we had to learn the PICAXE BASIC programming language… which took a total of 5 minutes… Anyway, here’s a simple BASIC code example (no pun intended). 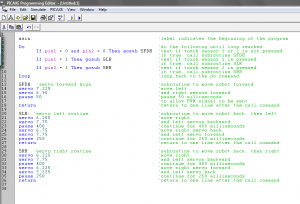 I don’t even know why I put so many comments in… maybe it was something I had to turn in?  So coding the robot turned out to be fairly simple.  The hard part was the actual physical construction of the robot.  So essentially, I wanted a shape that could have a lot of storage, but would require a minimum amount of surface material… a sphere!  To make it look like something, I decided I might as well make it look like a ladybug.  So I went out to design a 3D figure.  This 3D model is what I came up with (made on Google SketchUp). 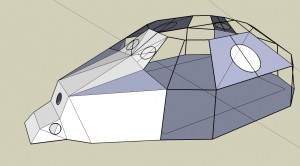 Of course, this was only for designing purposes.  The usefulness of the 3D model was that I could measure all the side lengths, to then create a 2D CAD file: 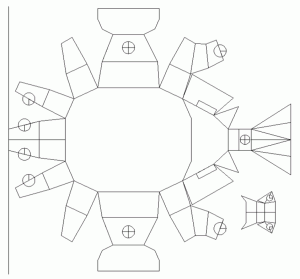 As you can see, it was a fairly complicated design.  It’s at this point that they told me I had to hand cut everything (despite the fact that we have a laser cutter that takes CAD files…).  Well, this was fairly disappointing, especially considering how many pieces I would have to cut… oh well…

Now I had a choice of black, blue, and red plastic.  And of course, since I decided to make a ladybug, I chose blue as the case color.  What?  Ladybugs are blue! 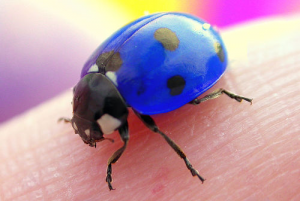 Now I don’t have any images of the construction process, because I didn’t bring a camera to school.  But I do have diagrammed images of the final result. 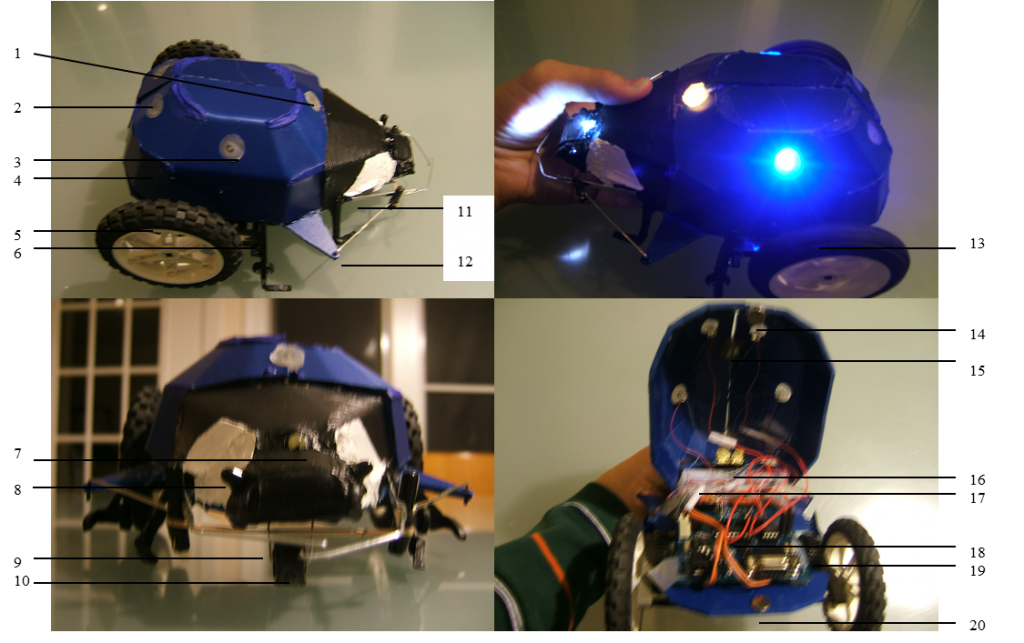 The parts of the ladybug-robot are:

I actually spent a lot more time in making this robot than many others did because I bothered to gear up the servos (as well as bypass the 5v regulator to give the servos more power).  Anyway, I ended up getting about 3rd place in the school with this robot, although I should point out that the competition was largely up to chance, as I would sometimes get 50 points, and sometimes over 150 (where more points are given for hitting more unique obstacles).

Also, I was required to complete documentation of this robotics project, so if you’re interested…