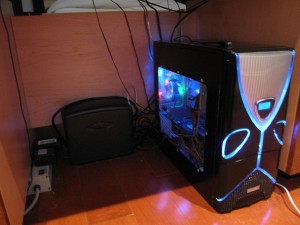 To increase productivity, I decided to build my own desktop this summer.  I wanted a decent desktop, but I also wanted it to be fairly cheap, so I went with these parts (which may or may not be a good combination):

Actually, it turned out not all these parts were compatible.  In particular, the HDD and Motherboard only worked together under certain BIOS settings.  Nonetheless, it was pretty easy to get the thing set up and operational.  I was happy with the results.

Anyway, it wasn’t really a large project or anything, I just figured I might as well post photos of the finished product, so here they are:

Around this time, I also thought it would be cool to get a small flashdrive with large storage space to serve as both a general flashdrive and an OS (Ubuntu).  Unfortunately, the flashdrive didn’t have a light, so I decided to take it apart and add one 😎 .  Adding the light turned out to be fairly successful (as did my partitioned flashdrive).