The coilgun is one of several forms of magnetic-based linear accelerators.  The most popular linear accelerator (being researched by the military) is the railgun.  There are two rails across which a capacitor is connected and charged.  Then, when a wire is placed on the rail, perpendicular to it, a huge current flows through the rails and the wire, inducing a magnetic field through the area enclosed by the wire.  Now, the magnetic field combined with the moving charges in the wire creates a force ($\vec{F} = I \cdot \vec{l} \times \vec{B}$), which “pushes” the wire away from the current source (increasing the enclosed area).  Thus, this linearly accelerates the wire.

The coilgun I worked on is a reluctance-based coilgun.  Essentially, it uses the magnetic field produced by a solenoid to attract a paramagnetic metal core towards its center.  Then, at the exact moment the projectile is at the center, the current is 0, so that there’s no pullback effect.  Specifically, this coilgun works around the fact that magnetic fields try to shorten as much as possible, and when a paramagnetic material is at the coil’s center, this is when the magnetic field lines are the shortest. Anyway, this is what I worked on. 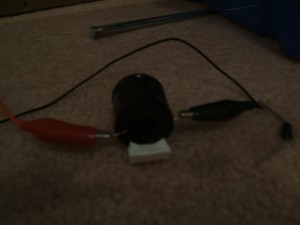 So to make sure that this coilgun would actually work, I took a solenoid and connected it up to a paltry set of 10 or so 9v batteries, and placed small iron objects inside.  When I completed the circuit, by just barely switching the current on and off, I did see a fair level of propulsion.  To test it even further, I got a few medium-large capacitors to try test charging and discharging.  This actually worked very well.  So I used even larger capacitors, and fashioned a home-made projectile out of a large bolt.  After some calibration, the results were fairly impressive (for being fairly unrefined): 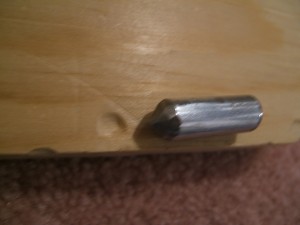 The projectile was able to make a large dent in some hard wood.  OK, not great, but still better than I was expecting for such an impromptu setup.  I think the capacitors supplied about 60J of energy, and I measured a speed of about 11m/s on the projectile, so given it’s mass, the projectile must have had about 0.5J of energy.  So, perhaps lacking a bit in terms of efficiency.  But considering 60J can be lethal, I wasn’t too disappointed with the results. (Also note: the capacitors themselves were much more dangerous than the actual projectile).