Now that I’d proven that I could actually make a pretty dangerous device, I tried to refine it even further.  So I hand wrapped a new coil out of some spare wire, and bought more powerful capacitors (40J each; 3 total). 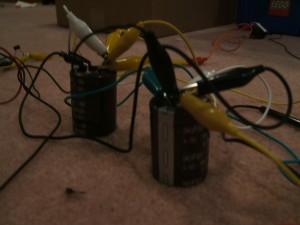 I also had to build a high voltage converter, and did so out of some old (somewhat non-functioning) HV boards.  Of course, the AC output had to be rectified to DC for the capacitors, and I had to figure out a way to switch the capacitors from charging to firing the coil.  This was made harder by the fact that I wanted to use a higher voltage, ie, have the capacitors go from charging in parallel to firing in series. 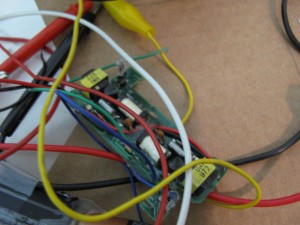 For the overall circuit of the system, I figured out a way to use a $N+1$ switching relay to switch $N$ capacitors from charging in parallel to discharging in series.  I also, luckily, had a 4-way relay that operated on 12v.  Perfect!  With all the parts, I decided to connect them all up… with alligator clips.  OK, so alligator clips made prototyping very easy, even if it was a somewhat lousy design choice.  My final setup looked like this: 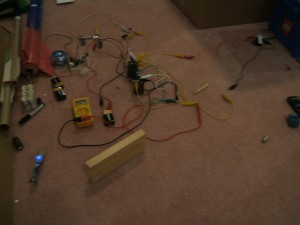 Needless to say, my parents were not very happy.  Actually, the way I set everything out was very dangerous, especially if someone came and didn’t know what they were doing.  Some of the hazards include (but are not limited to), the capacitors, each of which can be charged to a lethal level, the HV converter, which could cause fires and (obviously) shock people, and of course the whole fact that this thing could launch projectiles…

Anyway, I did eventually clear everything up, and I obviously never left any capacitors charged.  So how well did this version work?  It was OK.  The projectile sometimes made it through both sides of a soda can.