Many of my early projects focused on cramming all sorts of functions into one object. Most of these projects involved the standard 5mm LEDs. By around 6th grade, I started transitioning to using higher power LEDs – especially when my focus turned towards increasing the brightness of my flashlights, rather than the functionality. These are a few of the projects I did involving High Power LEDs. 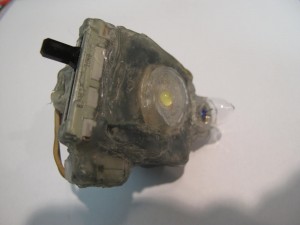 After the AGSF Flashlight, I realized that I wanted to focus on increasing the brightness of my flashlights.  So I started looking into high power LEDs.  Unlike normal 5mm LEDs, high power LEDs are able to dissipate much more heat, and thus can withstand a much higher current.  The LED pictured on the right was a Cree XR7090.  Given an input of about 1W, it could output about 100 lumens of light.  I attached the LED to an obscenely large heat sink, and used a 9v battery as input.  The design of my future models would be much more refined… 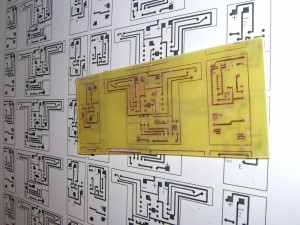 Like the original AGSF flashlight, I wanted to incorporate a lot of functionality into a compact device.  The difference would be the use of a high power Cree LED.  Also, this “flashlight” would be slightly more compact through the use of 3D folding of the PCB.  On the left, you can see the design I used for the PCB as well as an etched board. 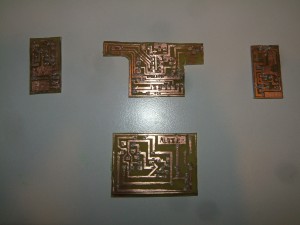 On the right, you can see the board cut and drilled.  Both operations were done with a dentists’ dremel tool.  The through-holes allow components to be placed and soldered, and the pieces were designed to fit together. 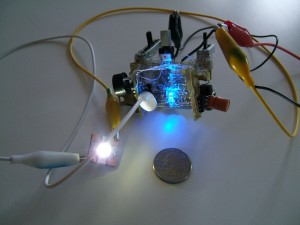 Skipping ahead several steps, the nearly complete circuit was still very rough for a flashlight.  However, it was able to do most of what it was designed to do.  The finished design had the LED controlled by a 555 timer which was controlled by two potentiometers – one for duty cycle and one for frequency.  This flashlight also featured an IR receiver. 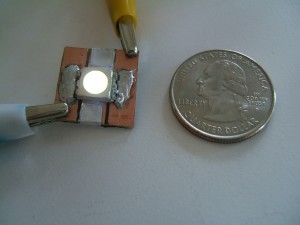 Here you can see an up-close view of the Cree LED, soldered to a much smaller “heatsink.”  Despite the size of the heatsink, it was still able to dissipate heat well for short periods of time (and low duty cycles). 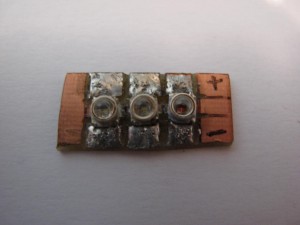 There’s not too much to say about this one… there are three 1/2 watt Cree LEDs on this board.  From the left, there’s the blue, green, and red LEDs.  One nice thing about using high power LEDs is that the throw of the light allows the colors to meld very well.  This makes for a much better color output than the comparable 5mm LED version.

This was a nice little flashlight where I attempted to power a white power LED (FV: 3.7v) with a single 1.5v AAA cell.  As you can see, the project was successful and in fact, the flashlight is able to produce a lot of light.  One of the innovations with this flashlight was the plastic case.  For some reason, 11mm ID plastic cases are not very popular, so to make one, I bought a 3/8″ ID tube and widened it under a blow torch.  You can see some of the ripples in the plastic as a result of the operation.