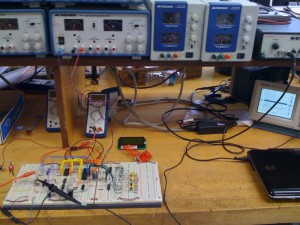 In this semester’s Microprocessor course, I decided to work with a partner to  build a complete (and simple) Microprocessor system to serve as an oscilloscope.  Unlike many of my other projects involving advanced discrete microcontrollers, this project would utilize the MC6802 MPU (microprocessor unit), which made the electronics aspect of this project a lot harder.  In order to get everything working properly, I devised a plan that involved first getting a simple LED blinking circuit working, then adding an ADC component to the circuit, then adding the LCD, and finally coding the oscilloscope.  In fact, it turned out to take a while to just get the fundamental circuit to a “complete stage”…

Relatively few parts were needed to complete the “test” circuit.

The MPU was, of course, the heart of the whole system.  Together, with the ROM and buffer (and intermediary logic), this provided a very primitive computer.  Then, to actually view output, the data lines from the MPU would have to be connected to a latch which would then connect to the LEDs.  In the flow chart below, the blue arrow represent data buses, and the green represents address lines. 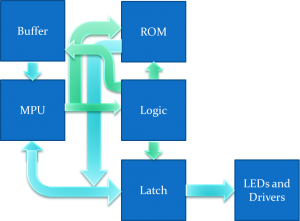 The circuit schematic diagram was not too difficult, as well.  Actually, one of the hardest parts of wiring was figuring out the correct logic.  (The purpose of the logic was to tell certain peripherals when to receive data/send data, and when to remain “quiet”). 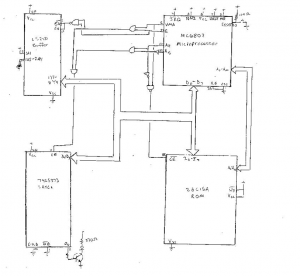 Now, while the circuit wiring was somewhat annoying, the actual assembly code needed to run the thing was pretty simple.  So simple, in fact, that I started by entering the raw machine code into a hex editor.  This wasn’t a really good long term solution, so I asked some others in the class whether they had any suggestions for an assembler.  They suggested ASxxxx, which turned out to work quite nicely.

However, while this system wasn’t too hard to set up, there were several major problems.  A lot of wiring was required for the logic (despite being such a small test system), and the tri-state buffer method of inserting the start address was too complicated and rigid. 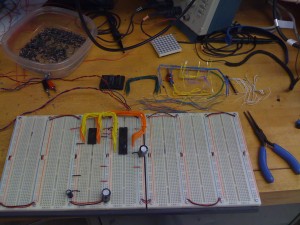 A few generations later, and we arrive at the final blinking LED circuit.  The parts involved were:

So this system turned out to be a lot simpler thanks to utilization of the decoder.  Instead of hard-wiring the logic to match the address space, I could just use the decoder to do all the heavy lifting.  (A decoder turns output pins on or off based on the binary value of a few input pins).  Because the decoder did so much work, the flow chart was greatly simplified. 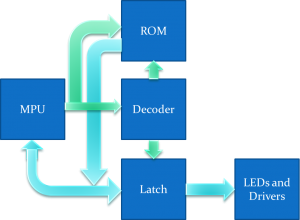