I had had a lot of fun playing around with guesstimated coils and capacitors, but now I wanted to actually figure out the correct coil to use.  After searching for a bit, I figured out a non-rigorous way to approximate the coil parameters.  First of all, it’s well known that the coil’s length should be slightly larger than the projectile’s length.  I figured 25mm was a good length for a projectile, so 30mm was decent for a coil.  I also decided to use 22Ga. wire because it seemed like a nice balance between resistivity of wire and coil density.

Now, I needed to determine how many coils of wire to use.  So I figured that I wanted the projectile to move a distance of about 1cm in about 1ms, which meant the coil should have no current about 1ms after firing.  This required a certain R-L-C circuit to get the timing correct.  Well the “C” was already figured out, as was “R” for the most part.  So now I could figure out the necessary coil inductance.  With this information, along with information about the coil’s length, ID, and wire gauge, I used a neat applet to figure out the final factor, number of coils. 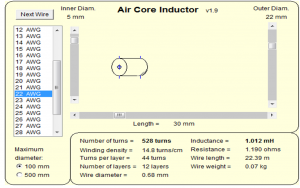 You can find the applet on this site: Barry’s Coilgun Design Site.  So with these dimensions, I set out to spend 2 hours meticulously hand winding a coil around an acrylic tube. 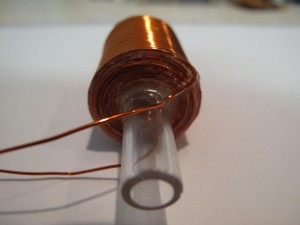 It actually looked pretty nice.  So taking this coil and the capacitors and relay and HV converter and power source, I packed them all into a nice box to contain all the items.

I also (with the help of my sister), made a really smooth projectile out of a steel rod.  We didn’t have a lathe then, so we used a drill press to hold the steel rod.  Then we sanded it through many layers of grits up through about 12000 grit, which basically made it optically smooth. 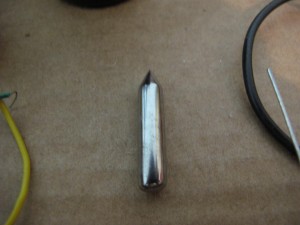 And here’s a picture of my final setup: 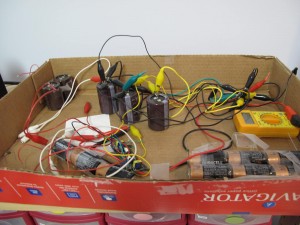 It’s basically the same as the one used for the last setup, except it has better capacitors and a much better coil.  The results?  Decent, but not great.

So why was it so inefficient?  I don’t know.  There are several reasons that probably play a role in the system’s inefficiency.  I used tons of alligator clips, each of which must have some small resistance.  The capacitors, connected in series could lose some energy, and the switching process was fairly noisy.  Also, the capacitors have a fair ESR (equivalent series resistance), so that certainly detracted from the efficiency.

Finally, I think the way a reluctance-based coilgun works makes it intrinsically inefficient.  For example, the discharge rate is far from optimal for propelling the projectile.  I don’t know if there’s a non-100% upper bound on the efficiency of a reluctance coilgun, but I’d suspect there should be one.  Others seem to have gotten efficiencies as high as 10%.