My current AG:MF03 flashlight design incorporates a 20 LED display by charlieplexing them to 5 I/O pins from the microcontroller. I won’t go into the details of how charlieplexing works, but you can see more here. So anyway, when I programmed the chip to sequence through each LED individually, I noticed that multiple LEDs were lighting up at the same time in some cases, and none were lighting up in other cases. So for example, if I was trying to just light up LED2 by setting all I/O pins to the high-impedance state, except for the two connected to LED2, then maybe LED2, LED4, and LED5 would all light up. Alternatively, doing the same with LED3, none of the LEDs lit up.

At first I was pretty sure I had made a mistake in my charlieplexing, so I scoured over the schematic diagram to make sure everything was wired correctly. I even produced a simple simulation on this java-based electronics simulator. All of these seemed to point to me having no wiring error in the circuit. So I thought maybe the circuit board I had made was bad. I tested, for example, resistances between the I/O pins to see if this would illuminate any errors. It didn’t really; in fact, I’m not even sure how much good data you can get from measuring the resistance across microcontroller pins.

If you’re interested in seeing the “theoretical” Charlieplexed schematic, you can see a simulation I created using Falstad’s circuit simulator.

By this time I had been fussing around for about a half hour, so I decided to systematically document which LEDs lit up as I sequenced through the LEDs in the program. At first, it all seemed random, but I knew it couldn’t be since the same pattern happened again and again. So I finished systematically figuring out what intended output led to what actual output. At first, it didn’t make much sense, but then I noticed something. If, Instead of an LED at LED2, I had a wire, then LED4 and LED5 would light up. But wait, so would LED7 and LED8. Ah… not if instead of the wire I had a backwards-diode! Then, LED4 and LED5 would light up but not LED7 and LED8! 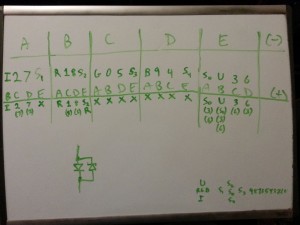 I checked the LED data sheet, and sure enough, they had an “reverse voltage protection diode” connected just as I had suspected. So I ordered non-“protected” blue LEDs, and replaced the blue LEDs on my board, and everything started working! I guess this experience really taught me the importance of really looking at the part datasheet. It also taught me that when encountering a bug, it’s important to really understand exactly what the symptoms are. I wasn’t able to figure out the problem until systematically documenting everything that was wrong with the charlieplexed system.